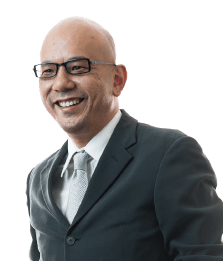 Datuk Kelvin Ng started his career in 1992 as a Tax Consultant with KPMG (Australia). From 1993 to 1994, he practised as a Senior Tax Consultant with Deloitte Touche Tohmatsu (Australia & Hong Kong). In 1995, Datuk Kelvin Ng joined Zaid Ibrahim & Co as a senior associate and became a Partner in 1999. He was on the executive committee of Zaid Ibrahim & Co and has been in charge of the firm’s administrative and finance portfolio from 2004 to 2014.

Datuk Kelvin Ng graduated with a Bachelor of Economics (Double Major in Banking & Accountancy) in 1990, a Bachelor of Laws and a Masters of Laws (Distinctions) from Monash University in 1992 and 1995 respectively. Datuk Kelvin Ng was a Notary Public and an Advocate and Solicitor of the High Court of Malaya as well as a Registered Foreign Lawyer of the Law Society of New South Wales, Australia.

Datuk Kelvin Ng is an associate member of the Australian Society of Certified Practising Accountants and is a registered trust officer at ZICOlaw Trust Limited (formerly known as ZI Labuan Trust Company Limited). He has been a registered tax agent with the Ministry of Finance and sat on the Labuan Tax and Business Council. He is also one of the Directors at ZICO Holdings Inc., and at ZICO Malaysia Sdn. Bhd.

This site is best viewed in Google Chrome. © 2021 ZICO Trust. All rights reserved.